While Japan is one of the most difficult countries in the world to be vegan, Tokyo is blessed by a wide variety of quality, affordable vegan and vegan-friendly restaurants, but most Middle Eastern restaurants don't count among them, as most Donor Kebab stores don't sell falafel. Fortunately Tokyo has three good falafel restaurants. Unfortunately Vespera's Falafel has closed, but hopefully he will re-open in the future.
This is really a sub-set of my main summary of the best vegan restaurants in Tokyo. 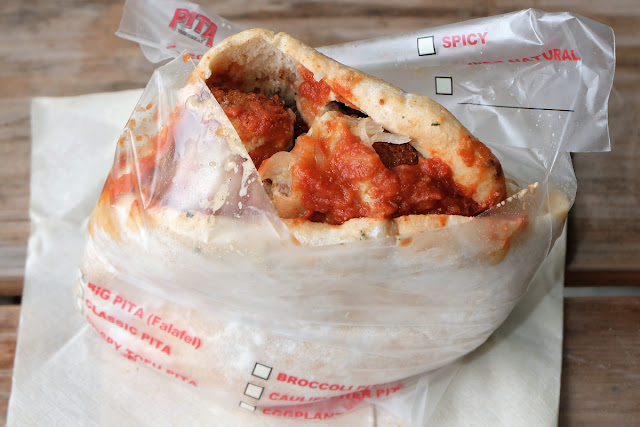 Pita the Great is run by an eccentric Israeli man, who's been serving up delicious falafel from the same shop in Akasaka for decades. While he's quite an institution in Tokyo, and his food is truly amazing if you can get hold of it, he seems to have moved his business priorities to producing wholesale products, and appears to care little for walk-in customers any more. He keeps irregular hours, and I don't recommend daring to ask him what they are. The word on the street is that he often opens from 12:00 to 1:00, but I haven't been often enough to confirm this.
On one visit I found him asleep on the floor, and decided not to wake him. So if you can get a falafel pita bread (or other Israeli specialties) you're in luck, but I wouldn't make it a priority.He has recently introduced some tables inside his shop, so especially when it's raining it's more pleasant to eat inside his mini-factory surrounded by machinery and flour everywhere than outside in the elements. 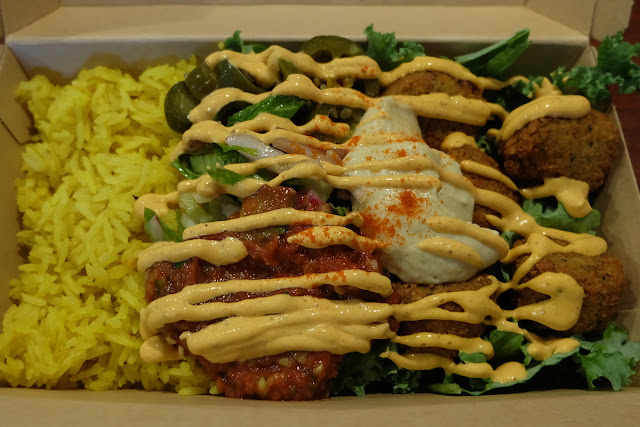 The newest lads on the scene, these "brothers"do a roaring trade serving up delicious vegan falafel to local office workers by day and those out on the town by night, and of course the few vegans who track them down for the best balance of quality falafel, price and reliable opening hours.
There is space for one small group to eat in the restaurant, but you'll need to strike gold to find it empty. Otherwise Roppongi West Oark is a five-minute walk away (directions from your location). This Shibuya institution was one of my favourite places to go when it first opened about five years ago, and it's still a decent option for a filling meal in Shibuya. However over my half-dozen odd visits during the last couple of years I've found that the quality of the falafel has deteriorated somewhat, though I may have just been unlucky in my more recent visits. Its menu is mostly limited to lentil soup and falafel dishes, there are only a few seats (so you may need to wait or take out during the lunch period) and it's a long (~ 15 minutes) and not-so-interesting walk from Shibuya Station. On the upside they serve Phoenix drinks, one of New Zealand's few good exports, being unfortunately an agricultural-based economy. If you're in the mood for falafel while in Shibuya this is definitely the place to go, but I wouldn't recommend fitting it into a busy Tokyo itinerary.