Niseko is a Meka for snow sports, boasting what some would call the best powder snow in the world (though Hakuba is also excellent). I visited three ski fields: Niseko, Kokusai and Mt Moiwa. Whereever you go, if you take just one piece of advice from this blog, bring plenty of snack food with you. Due to my late order and the Xmas backlog, my veganessentials order didn't arrive before I left, and I could really have done with all those snack bars I'd ordered, especially while travelling and on the slopes!

Getting There
The best way to get to Hokkaido for the environment is of course the train, and it's an interesting day's journey (or more if you stop off along the way) to take the shinkansen to Aomori and then an interesting trip through the world's longest undersea tunnel to Hokkaido, the Seikan Tunnel. (The Channel Tunnel has a longer undersea portion, however the the Seikan Tunnel is the longest and also the deepest rail tunnel). If you have a Japan Rail Pass (almost an essential for tourists who plan on leaving the Greater Tokyo are) it's all covered by the JR Pass, unless you want an expensive sleeper berth.

If you do fly, you won't be alone, as the Tokyo to Sapporo is the world's busiest air route. New Chitose Airport is about an hour and a half's flight from Tokyo, and flights leave from both Haneda and Narita airports. There is a Starbucks on the third floor. (Starbucks is usually the only place one can find soymilk, with an exception being Niseko, thanks to all the Australians - edit: and Tulley's Coffee). Also, the conveyor-belt sushi restaurant nearby has a few vegan options, including pickled plum, cucumber and gourd; these three can be found in sushi restaurants all over Japan, and are usually vegan. There are small dipping bowls for soy sauce under the conveyor belt for sushi, and ginger is in a box on the table. The powdered green tea is free (help yourself). Just don't be tempted by the deep fried squid legs or the  crab intestine sushi, quite a bargain at only 200 and 300 Yen respectively. The Tokyo-Sapporo route is reportedly the busiest air route in the world, and is flown by several carriers. Beware that while Air Asia (soon to close) and Jetstar offer some amazingly low fares for the route, they cancel planes regularly and when they do offer no compensation or even a refund, leaving the only option to take their next available flight, and if this isn't possible (ie if they want you to return two days later, but you can't due to work) then you just lose your money. I recommend booking early on a good Japanese airline (or taking the train).
2015 Update: Be very careful with Low Cost Carriers in Japan, and don't even think about flying Vanilla Air. Please see my LCCs in Japan website for more info.

Whichever way you're getting there, consider using Takuhaibin to send your skis/snowboard (and luggage) to your hotel. It's probably cheaper than checking it in on your flight, and saves lugging them on and off trains. It's surprisingly cheap and simple, and can be done through convenience stores. 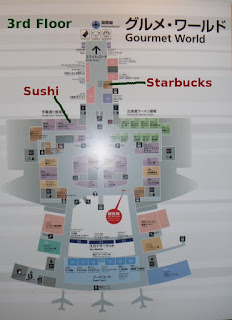 Niseko
Niseko is almost a 'little Australia', and during the Xmas period I'd guess three quarters of people there, including many working in the restaurants, are Aussies, and most of the rest also foreigners, including many from Hong Kong and Singapore. 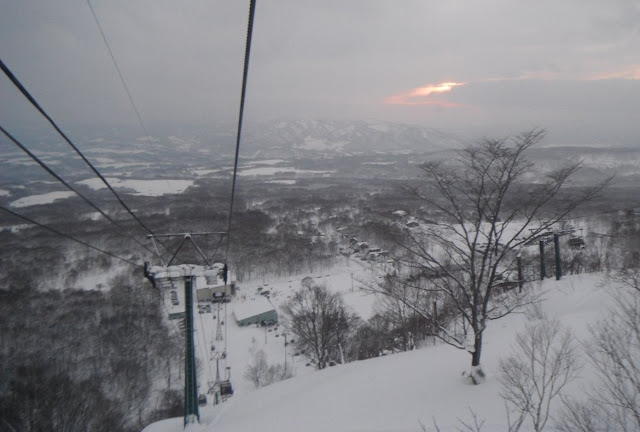 On the slopes themselves, food is mostly a matter of survival. Most places will serve white rice and "fried potatoes". King Bell on the Hirafu Slopes serve pizzas with dairy-free bases, and a pizza base with tomato sauce and basil was better than it sounded, even by the fourth one.
The Grand Hirafu Area was also the best area for night skiing, largely because the Gondola runs until late.


At Annupuri, my favourite of the four ski areas, the Nook do a green salad, rice and "friend potatoes" - usual vegan fare. Beware that the last bus back to Hirafu leaves just after 8PM - I found out the hard way that it's a long taxi ride around the mountain, as easy as it seems to ski over it.


The Niseko Village Area area was the worst, with the restaurants (including the Lookout Cafe on the slopes) seemingly dominated by the Hilton Hotel, with food and prices to match. I couldn't find anything vegan, and prices for drinks were ridiculous. I don't recommend this area.

I never made it to the Hanozono Resort Area, so if there's a vegan cafe there I missed it.

For dinner, or a break during lunch, walk or take the shuttle bus to the Taj Mahal restaurant, about half a kilometre from the Grand Hirafu area. They were happy to make food vegan (and clearly made the effort to check ingredients) and the food, while the typical North Indian fare found all over Japan, was excellent.

On Sunday they have a buffet. Needless to say, little of it (basically Pappadoms and one curry) was vegan, but they cooked me roti, an additional Channa Masala and offered alternatives to other items not vegan. All up, it was a great deal at 1950 Yen (my other meals there were about the same price). The owner, originally from Bombay, has lived in Japan for fourty years, and he also has branches in Chitose (near the airport) and Sapporo. The Taj Mahal is the obvious choice for dinners or a good satisfying lunch while at Niseko.


They also have two buses/vans in the area, one by Seicomart, offering hot food on the go. I found the quality (not surprisingly) much lower than the restaurant, so it's well worth the walk to get the food fresh from the kitchen rather than from the microwave.

Kokusai
Kokusai, which literally translates to 'international' (though I only saw one other foreigner there, among several hundred Japanese - quite the opposite of Niseko) is about a two hour bus ride from Sapporo Station. Compared to Niseko, I found its runs to be longer and wider, and I enjoyed skiing there a lot.


It also has two Gondolas to near the top of the mountain, so this and the wide, long runs meant that a greater proportion of my time was spent skiing than on chairlifts or in cues than at other skifields.


Don't expect much for lunch though. The only thing I could find at all (other than french fries) was freshly baked sweet potato (that's kumara for any kiwis reading this) from the dining area to the far right in this photo.

Mt Moiwa Ski Resort
For a more family affair, head to Mt Moiwa Ski field, near Sapporo. This is where families come for a day skiing, and where working folk duck by for a quick night ski after work. Facilities here are very simple, and food very basic. I found nothing vegan except fries and rice.

Note: I am writing about the Mt Moiwa near central Sapporo. There is a much larger Mt Moiwa Ski resort close to Niseko, which I didn't go to. Also note that this is a skier only area (no snowboarding).


To get there, take the subway to Makomanai Station, and then there is a shuttle bus (or a taxi) from there. 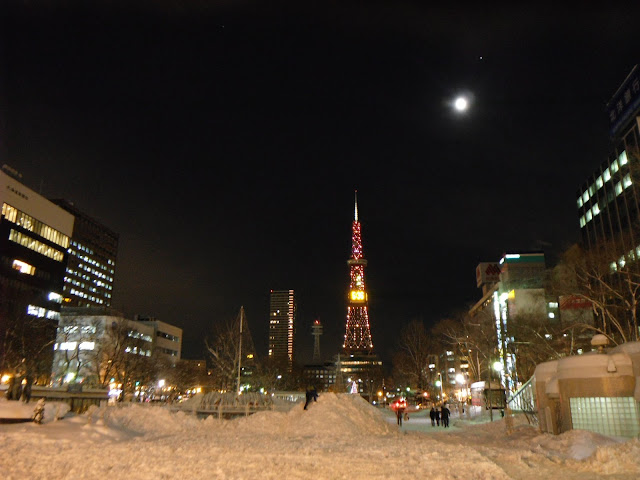 If you're in Hokkaido, chances are you'll go to Sapporo. I found it to be a very pleasant, liveable city. Being a planned city, it has straight, wide streets, and a central park-like avenue (Oodori) running right through the centre. It reminded me very much of Christchurch (especially with the hills in the distance) and of Kaohsiung, which was probably planned and built by Japanese at around the same time.


2014 Update: There are now several vegan and vegetarian options on Happycow. I have removed Jyoti and instead also recommend Lohas Rawfood and Itadakizen (details to come soon). I didn't get to try Heureuse Vie, Cafe Chienoki or Natural Food Holo.

I recommend three places to eat in Sapporo, all from Happycow.

Aoi Sora Organic Cafe
Being Sapporo's only vegetarian cafe (it's actually vegan and organic) this should be top of the list. The meal was fresh and delicious (such a change from days of rice and French fries) and the friendly owner speaks good English. It's well worth the effort to get there.


Iki Laboratory
Iki Laboratory (it's really a restaurant) labels many items on its menu 'vegan' and 'oriental vegetarian' (全素 - no garlic or onion). Portions were small (as normal in Japan) but for such excellent food, it was still good value.


Jyoto
2014 edit
I previously recommended Jyoti for Indian food (written Dec 2012, removing it now Feb 2014). However on this visit the owner wasn't offering to make the vegetarian set vegan any more, so ordering dishes separately meant that my meal of dahl, lacha paratha (bread), samosas and "spicy potatoes" (essentially a potato curry, made with about one potato) came to about 2000 Yen. The dahl was also the only dish he suggested could be made vegan. And it was also very cold inside. So with these changes and the extra places added to Happycow, I no longer recommend Jyoti.
That said it is centrally located, and the staff clearly still understand veganism, so if you're craving an Indian meal it's still a possibility. But I'd highly recommend giving your patronage to one of the half dozen or so vegan or vegetarian restaurants in Sapporo.
Posted by Jesse at 19:52