I don't know why it took me two years to visit Alishan Cafe in Saitama, north of Tokyo, but now that I've been once it will become as regular a hangout as anywhere so far from Yokohama could. If you live or stay around Tokyo, a trip to Alishan is three-fold: an escape from the city (while only an hour away), a delicious vegan meal and a chance to stock up on organic whole foods. But even if you're just visiting Japan for a short time it's well worth the trip to visit Alishan.

Alishan Organics is owned by Jack, American, and Faye, who is (surprise) from Alishan. Alishan is a mountain in central Taiwan, and is deservedly one of the country's top tourist destinations (for locals and foreign tourists, including ever-increasing numbers of Chinese).


Alishan is especially popular for its sublime sunrise. Its fame began a century ago, back when Taiwan was part of Japan, when its forests supplied timber for the Japanese empire. The Torii (gate) of Meiji Shrine (close to Yoyogi Park in Shibuya) is from Alishan, as was the original which was destroyed during the WW2 bombings. The Japanese-built narrow-gauge railway up the mountain (to transport logs), complete with the original steam train, used to be used to take tourists up the mountain, passing through stunning scenery and a range of climactic zones, and it was especially popular during the sakura (cherry blossom) season, for which Alishan is famous in Taiwan. Unfortunately the train was discontinued a few years ago, apparently due to typhoon damage.

Alishan Organics started out in the early 1980s, when Jack and Faye, who at the time were exporting Japanese antiques and folkcraft, began importing small amounts healthy and nutritious food (such as whole wheat flour and peanut butter!) for their family and friends. From there they grew into the major wholesaler of organic and whole foods in Japan they are today. Their products can be found in organic and natural food shops nationwide (including Natural Mart and National Azabu in Hiroo) and they have been running the cafe and shop at its current site since 2001, when they built their 'big red barn'.  It's worth bringing a bag to stock up at the store, but they also do direct mail order through their Tengu Natural Foods site if you don't want to lug your next month's lentils or Amy's soup tins back on the subway.

Despite being located on a main road, Alishan Cafe has an outdoor seating area which backs directly onto the beautiful Koma river, so it feels quite secluded from the outside world, and is a beautiful spot to eat, drink and chill out.


During the evenings the outside area is often lit by candlelight, and on my visit there was a sitar and tabla ensemble entertaining the crowd of Japanese and foreign visitors. The seating area was fairly full, so it wouldn't hurt to make a reservation for the evening meal during weekends (phone 042-982-4823).

The five minute walk to Alishan Organics from Koma Station passes through market gardens and along the Koma river.


It's well worth having a walk along the river, which is popular for swimming (and unfortunately fishing).


The area downstream from the cafe is also a popular picnic and camping spot (Kinchakuda), and it's great to be able to camp and not have to worry about cooking meals, especially if you need to carry your camping equipment from the train (as I did).


If camping, it's best to camp in the middle of the loop (as far as possible from the entrance) as it's quieter and the gravel is much finer. That said, it is still gravel (as of August 2014, but this changes as the river does) so be sure to have a comfortable mattress.  I also don't recommend camping during the hottest part of the year (August) as I did, but during the spring and autumn this would be a charming spot. And, like skiing or hiking at Hakuba, it's so great to be able to enjoy the outdoors of Japan without having to live on tofu and white rice.


It's not just the setting, camping opportunity and grocery store that makes Alishan Organics worth the hour's trip from Tokyo: the food will bring any hungry vegan back again. Vegan options are listed on separate pages (some contain honey, so if you don't eat honey then ask), and include a range of international dishes, including Amy's (US brand) pizzas and burgers, and delicious vegan baking.

The fig and pear pie was the best pie I've eaten in longer than I can remember, and the coconut curry the most authentic Thai meal I've had in Japan, and the lemongrass aroma reached me before the curry itself. (T's Tantan's Masaman curry is also very good.)


They also serve Taiwanese tea, from (surprise) Alishan, which (besides sunrises and sakura) is very famous for its tea, as, like Li Shan (which boasts the highest tea plantations in the world) its altitude and weather patterns make it one of the world's best places to grow tea.

During the busy summer period the menu is somewhat reduced (due to the large numbers of customers) but still a delicious meal, and vegan options are always available.


Living in Yokohama, I'm fortunate that since the Tokyo Toyoko Line (for Yokohama) was joined up with the Fukutoshin (subway) Line, I can make it to the cafe with just one transfer (though two is often faster). It's about an hour from Ikebukuro (Northern Tokyo) on the Seibu Line. The Fukutoshin Subway Line continues (as the Seibu Yurakucho and then Ikebukuro Lines) to Hanno Station, from which it's a short hop on the Seibu Chichibu Line to Koma Station. For the best route there I recommend Hyperdia (from: anywhere, to:Koma; they also have a very useful smartphone app) or just go to Ikebukuro Station (or wherever you are) and ask the staff for the best route to Koma Station in Saitama. 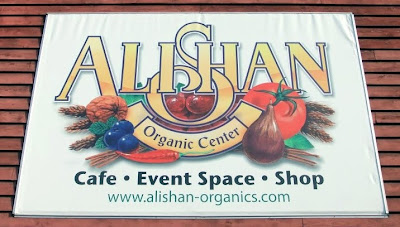