This page is a subsection of my post on Vegan Restaurants in Tokyo, but I've made it a separate post for people to be able to more easily find it. It was updated in January 2023, following the re-opening of Japan to foreign tourists.

Before the border closures T’s was also open for breakfast, and hopefully it will be again soon.

From within the JR ticket gates, follow signs to the Keio Line, and then to the Keio (underground) “Street”. Walk down Keio Street almost to the end. Starbucks will be on your left. T’s Tantan is well signposted (in green) on your right, shortly after Starbucks, just before the end of the ‘street’. There is usually a long queue, but it moves fast.

If you don’t have a rail pass or a JR ticket, you’ll need to either buy a platform ticket (¥140, valid for two hours and available from the counter) or use your Pasmo/Suica card at the automated ticket gates.

Great Japanese food, inexpensive, with fast and efficient service.
Tokyo’s most famous vegan restaurant, popular even among non-vegetarians.
Inexpensive take-outs available.
This is fast food, so it’s important to eat and move on reasonably quickly.

T’s Tantan is undoubtedly Japan’s most popular and most famous vegan business and is the only eatery at which virtually all vegan (and vegetarian) visitors to Japan dine at least once and usually several times. After the owner’s oldest child left home, she decided to open a restaurant (T’s Jiyugaoka, which I recommend visiting on the way to Yokohama) to serve the kind of healthy food that she liked to eat herself and cook for her family. It was so successful (despite being in an underground basement well off the tourist trail) that when a special health-focussed food “alley” (the underground Keio Street) opened inside Tokyo Station she was invited to open a store. She came up with the idea of a fast, healthy, inexpensive but still very Japanese menu, and it was such a success that what started out as a retirement project has now become the career she never planned, having spent most of her adult life raising a family.


She has since opened branches in Ueno Station (recommended in that itinerary) and also one at Narita Airport, Tokyo’s main international airport. She also sells packaged ramen (available in the stores) and bento boxes at Haneda International Airport.


While the focus is its namesake tantan (a type of thin noodle, commonly confused by foreigners with ramen), seasonal dishes come and go.

Surprisingly realistic versions of traditional Japanese and Western animal-based foods.
They might be too realistic. 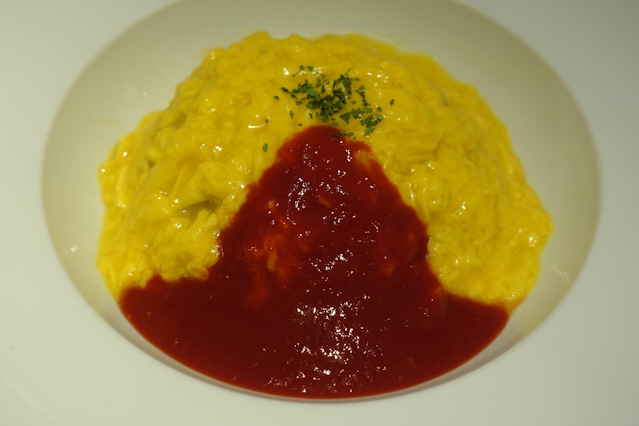 2foods is a new vegan café chain which aims to revolutionise the plant-based food industry by using the latest technology to create “healthy junk food”, and if their egg and cheese alternatives are anything to go by, I think it’s safe to say they’re succeeding. As well as this store inside Tokyo Station (officially called 2foods Yaesu Underground Shopping Mall), it also has branches in Ginza, Roppongi and Shibuya (none of which I recommend in this guidebook due to better value nearby alternatives) and an online shop.
2foods specialises in donuts but also serves burgers, curries and other fast food, as well as desserts. Portions are fairly small and quite expensive, but they’re reasonable value given the location and the research and development that has gone into them. I recommend trying the omu-rice (fried rice with omelette and ketchup, shown above), a surprisingly realistic vegan version of this traditional Japanese dish. They also do take-outs which are good for day trips.

Both are fast and convenient. T’s meals are simpler and more traditional, while 2foods specialises in Western food, particularly plant-based alternatives to animal proteins. Not surprisingly, therefore, prices for a satisfying meal are lower at T’s. The dining space is more cramped at 2foods.
Both do good take-out items, but sandwiches from T’s are probably the best value and likely to last the longest.
T’s is located within the JR ticket gates (but not the shinkansen gates), while 2foods is in a shopping mall outside of the gates. This makes T’s faster if transferring between JR trains but means that if you’re not taking JR trains and don’t have a Japan Rail Pass (for example, if you are travelling by subway), a platform ticket is needed (see above).
For most visitors, I would try 2foods once (perhaps when not using JR trains, or when missing foods from home) and eat at T’s most other times.